The last two weeks have been very.. hum.. intense! I completely scraped the current visual for a more colorful and simple one. I was not satisfied with the dirt and how it was just like a bunch of colored brown pixels, the texture repeat from each 16x16 tile was not even good. So, I looked at a few games to see how they managed to make their game looking cute/nice and I ended up with this visual... for the moment. It could be the definitive one, but maybe not!? Some of you might not like it, but at the same time, I think I need to be realistic and be aware of how bad I am with pixel art. In my head, i'm making a crazy looking game like Ori and the Will of the Wisps but with pixels.. but I can't do that.. I just can't.. "Yeah but you can watch tutorial" Yeah I can, but tutorial don't do much more than oh you can match those 2 colors for that and to make snow you can put that blue and.. ok.. but I don't want to make snow like that, I don't want to copy what you did, i want to create something unique myself. So I'll probably just end up doing the game and over time, i'll get better, everytime I change something in the visual, it gets better. So, I guess that's some kind of improvement. For instance, the bunny. It was just a sprite from Stardew Valley but between that one and the one in the screenshot down below, there was another version but unfortunately, I didn't save any screenshot of it and the PSD file has since been modified and saved. Sowwy :( But my point is that, it evolved, so my pixel art will surely be better over time :) 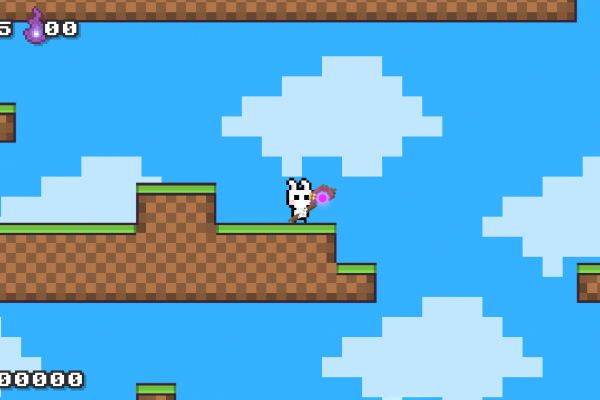 So in the last two weeks, I've worked a lot on improving what was already there, but I also added a lot. Let's take a complete look at everything even what I've already talked about.

New map visual
I changed the map visual so it looks simplier, more colorful, more cute. The old design was.. weird.. but even if this one makes tiles more "in the face", if that make sense, I'm happy with it. Like it's tile based and that's it ! :P As it was already the case, the grass is still removed after an explosion. But with the simplier design it probably does less visually, but hey! it's cute! Take note that the sky is just a test and the game will probably end up being completely underground at all time, except maybe in some kind of hub before starting the adventure.

New Bunny visual
I've worked a lot to place correctly a good looking rabbit into a 16x16 tile, but ended up with a 11x18 one, the reason why is because 16px seemed not enough to fit the head I already had built + the body and legs. with 18px I've been able to make this. it was important for me to avoid the bunny from being 16px wide. Because when you want to jump between 2 solid tiles, you need to be able to fit easily. If your character is 16px wide and the hole between 2 tiles is also 16px wide.. it means that your character needs to be perfectly between them otherwise you won't go through... While in motion it's just impossible.. The Collider is also as large as the body, not the head, so basically 7px. It's therefore very easy to jump between 2 tiles :) It will also gives more tolerance for when an enemy touch you or not.

Weapon
The bunny now has a prototype weapon that looks strangely like the stick of Megumin from Kono Subarashii Sekai ni Shukufuku wo! :) I'll update it... one day... The weapon currently has a light ball at the top.

Animations
I added a few simple animations to the bunny (Idle, Attack, Jump, Move) The jump animation is hard to see, because of the motion, but it's there. Also the attack animation sucks, I'll make a better one one day.

Sound effects
I've added a few sound effects I made with my mouth and by punching things! So you have walking/running sound, jump sound, attack sound. Those are obviously probably going to be updated one day, but for now I think they sound great.

Proto Menu
I've built a very basic menu that I won't show right now, with what I think are going to be each element of the menu and I'll start working on the options menu where you'll be able to adjust master volume, save data, game resolution, fullscreen/windowed and maybe others that just don't come to mind. I've already worked with some of them in a previous project (volume, save) but I want to be able to offer the possibility to adjust the resolution and window mode. In this previous project, saves were managed by some kind of txt file created and read when needed, it was easy to edit and unlock everything by changing some "False" with "True". I think I can use something called PlayerPrefs which is pretty much a built-in save feature.

After everything I just said, the game finally took a big step forward and now look like this :

I can't wait to progress further until it really looks like a game :)

Oh and the proto mechanics from the previous post... they're now all in the trash can :)