I hate blogs.. But for some reasons I've decided to create one for my upcoming projects. Most games are released with pretty much no detail from their development period, we often see the games in a state close to what they'll look at the release. I've decided that I wanted to show the game from the very beginning, to see one day how it evolved from the beginning to the release.

Over the last years, I've been doing Rom Hacks, but also some Unity3D projects. 100% of those are only stupid games having no other purpose than helping me with Unity3D and making some friends laugh. But now, the time has come to try something else. Something more serious. I've been thinking a lot about what I like in video games. I took my notepad (yeah I still know how to use a pencil), and took some notes.

Beside Super Mario 64, most of my favorite games are independant games, like Shovel Knight, Spelunky, Ori 1 and 2, Celeste, Hollow Knight, etc. Those games are freaking amazing! So I decided to build something serious and, hopefully, fresh, based on the games I like. For example, let's say I really like the random generated maps of Spelunky but I also like the Air Dash in Celeste. Then ok, let's build a rogue like game where you can explore the world by dashing. That's an example. But I've noted a few things I really enjoy about these games. My goal is to create a game where I can't say "that's so stupid!" because it'll be made only with things I like and will be fine-tuned until """"perfection""". Over the next... years... I'm going to post information about my game. I'm still a noob with Unity3D, so don't expect anything soon. I need to learn, get good and one day, maybe I'll be able to share the world my game.

For the moment, I'm still doing pretty good for a beginning... I think...

The screenshot below is the earliest I have and it's from 3 days ago : 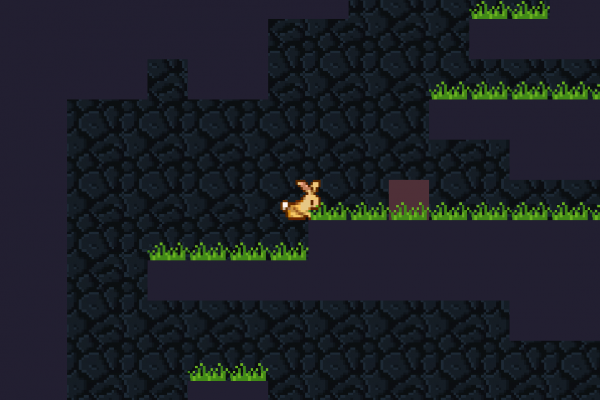 There is a Stardew Valley bunny from Spriters-Resource.com with no animation moving in a randomly generated maps and a moving background. Obvisouly, one day I'll work hard on an original sprite and make sure everything is 100% created by myself. But for the development, I think it's okay to grab everything I can to help :)

Then this screenshot is from 10 minutes ago : 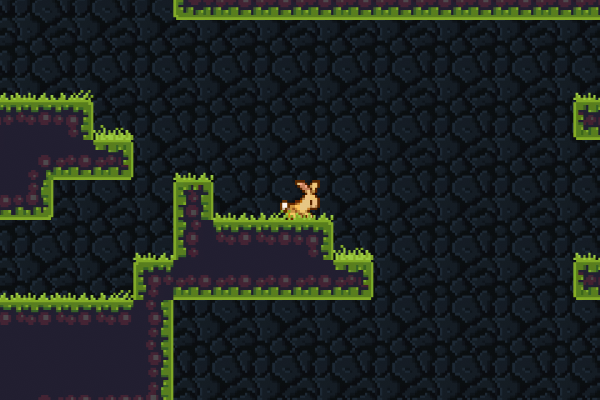 We now have a tileset grabbed from a RPG Asset. I think it was from Humble Bundle or a similar website. Once again, it's going to evolve into something I'll create :) I added autotiles and different grass sprites.

We can't see it now, but when you fall from too high, your character freezes for a second and soon / one day, it will get damaged and have an animation like you can see in Spelunky.

That's it for now. I'll try to continue providing details about the game, what it's all about, etc, but we are still in the very beginning, i'm still trying things, so please understand that the game looks like SHIT right now, but it's normal! :)

The next thing I want to add is the possibility to destroy walls. It's a bunny mage and I want the wand to be able to throw fire balls.

By the way, the post image is not from me, you know I don't claim anything :) it's a shirt from Teeturtle. It's really cute :) https://www.teeturtle.com/products/mage-class